No state existed in the territory known as South Sudan before the European scramble for Africa. The area only consisted of small, medium and large nationalities that coexisted in relative harmony. The indigenous populations and their territories remain largely the same to date.

This tranquil existence was interrupted by European invaders seeking trade commodities and markets. South Sudan became the main source of trade commodities such as slaves, gold, ivory and timber. Thus, enormous human and other resources were plundered for generations.

Modern South Sudan emerged during the Anglo-Egyptian Condominium (1898-1955), upon the break-up of the Ottoman Empire. Britain and Egypt colluded to occupy Sudan with separate administrative arrangements for the north and south. After the defeat of the Mahdist army in 1898 during the battle of Omdurman, North Sudanese accepted the rule of the new Anglo-Egyptian regime. However, South Sudanese rejected the regime and continued to fight for their independence.

This straggle for liberation continued for several years, even after Sudan obtained independence in 1956. Sadly, 37 of the past 56 years have been wasted on major civil conflicts; the first from 1955-1972 and the second from 1983 to 2005 when the comprehensive Peace Agreement (CPA) was signed. In fulfillment of a provision of the CPA, South Sudanese voted for independence during the January 2011 referendum. South Sudan was declared a sovereign state on 9 July 2011. 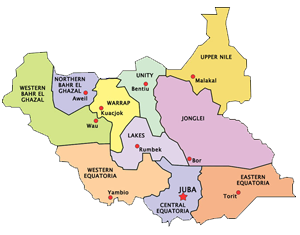